The Tattoo Thief by Alison Belsham

When Brighton tattoo artist Marni Mullins discovers a flayed body, newly-promoted DI Francis Sullivan needs her help. There's a serial killer at large, slicing tattoos from his victims' bodies while they're still alive. Marni knows the tattooing world like the back of her hand, but has her own reasons to distrust the police. So when she identifies the killer's next target, will she tell Sullivan or go after the Tattoo Thief alone? 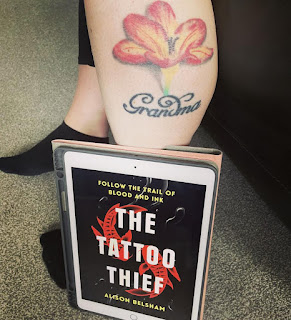 This was Tsundoku Squad’s June book, so our 6th read together.

This was a fast paced, easy to read book. Marni seemed pretty bad ass if I’m honest, I liked her character and enjoyed the tattooing aspect of it, I’m a big fan of tattoos. It was a bit predictable at times though, and I think a few of us guessed certain things at one point or another. Sullivan seems a bit arrogant I though but I warmed up to him a bit throughout.

But it was also a bit gory. There are parts where the Killer speaks, and those are the parts I enjoyed the most. It gave the book an edge I thought, and I honestly thought I’d have given it less stars if those bits hadn’t been there.

A good read, easy to read (I read each weeks part while I was on the exercise bike!), and I’ll more than likely read book 2 and see if the story carries on.

I gave the book 3 and half stars but rounded up to 4 on Goodreads (as they still don’t do half stars grrr).

Check out Em’s collective round up and review here: REVIEW