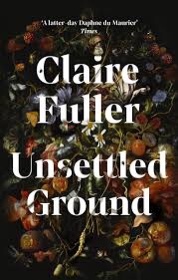 What if the life you have always known is taken away fro you In an instant?What would you do to get it back?

Twins Jeanie and Julius have always been different from other people. At 51 years old, they still live with their mother, Dot, in rural isolation and poverty. Their rented cottage is simultaneously their armour against the world and their sanctuary. Inside its walls they make music, in its garden they grow (and sometimes kill) everything they need for sustenance.

But when Dot dies suddenly, threats to their livelihood start raining down. At risk of losing everything, Jeanie and her brother must fight to survive in an increasingly dangerous world as their mother's secrets unfold, putting everything they thought they knew about their lives at stake.

This is a thrilling novel of resilience and hope, of love and survival, that explores with dazzling emotional power how the truths closest to us are often hardest to see.

I received a copy of this book from the publisher Fig Tree and Netgalley in return for an honest review.

This book was so different to what I expected. The characters are lovely and so different in the way they live. Jeanie and her twin Julius have been brought up by their mother Dot so different to the way others around them have been. Jeanie has a Heart condition from having Rheumatic Fever when she was a child and her mother Dot is very careful over what she can and can’t, or should and shouldn’t do. They are 51 years old now and still live at home with Dot, Jeanie still has no job, never had a boyfriend, and doesn’t do things like heavy lifting because of her heart, but instead helps Dot in the garden with vegetables they sell in the village. Julius works and bring the money in for the household. Their father passed away when they were kids.

But Dot suddenly dies and life is so difficult for the twins, especially Jeanie who really has no clue how the world works properly. I liked the innocence of Jeanie, but the bravery she has about it. She knows she will struggle but gets on with it. Julius seemed lost, and I think he needed to understand why their mother kept them at home them the way she did, before he could let any of it fade away.

It was a good book, slightly strange in places, but had a strong undertone of basic love between a brother and sister.

thank you again to Fig Tree, Netgalley, and always, the author Clare Fuller.