The Ends of the Earth by Abbie Greaves 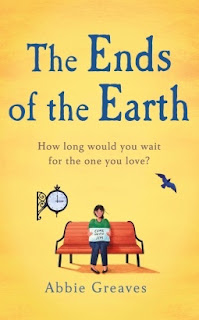 Mary O’Connor has been keeping a vigil for her first love for the past seven years.

Every evening without fail, Mary arrives at Ealing Broadway station and sets herself up among the commuters. In her hands Mary holds a sign which bears the words: ‘Come Home Jim.’

Call her mad, call her a nuisance, call her a drain on society – Mary isn’t going anywhere.

That is, until an unexpected call turns her world on its head. In spite of all her efforts, Mary can no longer find the strength to hold herself together. She must finally face what happened all those years ago, and answer the question – where on earth is Jim?

I received a copy of this book from the publisher Random House UK and Netgalley in return for an honest review.

I’m not sure what I was expecting from his one but I don’t think it was along the lines of the what the story told! It was a nice book though, with a strong undertone of love and grief, just not in the way I thought it was going to be.

Jim disappeared 7 years ago, and ever since, Mary has sat in the same place at Ealing train station with a sign reading ‘Come Home Jim’. I was drawn in from the start wanting to know were Jim was and why had he left? Mary is a lovely girl, she met Jim and fell in love, after only 4 days they moved in together. She left her family back in Wales and moved to London to Jims flat where they were extremely happy.

The story goes from the present to the past, and in the present Mary is working in a supermarket during the day and for a crisis helpline through the night. She meets someone one night at the train station who also joins the crisis helpline and befriends Mary, and keeps digging for more information on Jim, but is there an ulterior motive? The other characters in the story were well written, and I really liked them. kit who works at the crisis helpline was a favourite of mine through the second half of the story.

This book had me guessing until the end and we find out wha happened and why. There are triggers of depression, alcoholism and grief in the book, which were handled very well.

Thanks again to Random House and Netgalley, and of course Abbie Greaves